2012 Report on the Cost of Child Care in America 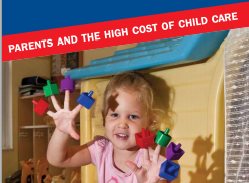 On August 15, 2012, Child Care Aware of America (formerly NACCRRA, the National Association of Child Care Resource & Referral Agencies), released Parents and the High Cost of Child Care: 2012 Report (August 2012), which shows that the cost of child care in America continues to increase.

The report ranks the states based on the cost of child care as a percentage of state median income for a two-parent family. See the press release summary here.